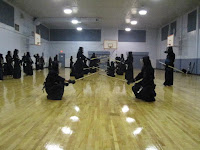 This past week we were very honored to host some very special guests.  The junior national team from Japan came to visit and practice with us for three days.  In addition to the team, we also hosted the individual boys and girls champion, as well as the kendo speech contest winner.  They were chaperoned by Ota Sensei, hanshi hachidan and co-creator of the boku ni yoru kendo kihon waza keiko ho, Toyomura Sensei, kyoshi hachidan, and Enomoto Sensei, kyoshi nanadan and head coach of the team.  This was a wonderful experience for our dojo and each of us that were able to participate.


Over the three days of training we were able to witness a demonstration of the kihon kata by Ota Sensei and Toyomura Sensei (Thursday night) and also a demonstration of the tradition nihon kata (on Saturday).  Both times I was amazed at how effortlessly they moved and also how they came back to the correct distance each time without any thought.  We also had a chance to perform all nine kihon kata, with instruction from Ota Sensei throughout.  I provided a video of their first demonstration below for anyone that is interested.

Throughout the various practices I was able to do jigeiko with not only all three of the Japanese sensei but also with sensei from Idaho and Seattle that I haven't been able to practice with before.  I definitely learned a lot and had a great time with each of them.  At one point, while practicing with Ota Sensei he stopped me and told me that I had hit a good Kote.  I thanked him and he emphasized "No, nice Kote!!"  This one moment might be my favorite one of the entire weekend.  I was also able to practice with each of the Japanese students and experience their speed and power for myself.  The experience was definitely equal parts humbling and inspiring.

Saturday, when we had all of our guests together for training, we were able to go through various drills that the students showed us, and then received additional advice and points to remember from Ota Sensei as he went through each one with us.  One standing theme that he had for us was "Hidari ashi, hidari koshi, hidari te."  He said to focus on the left leg, left hip, and left hand, and generate the power from there.  This will help with ki-ken-tai-ichi and help us strike with our whole body, not just our hand and arms.  He pointed out that the Japanese students were all doing this in their strikes, and we should work to integrate that into our training and movement.

Each of the practices also included shiai matches between our high school and junior high members and their team.  They definitely showed us why they were the champions, putting on a great show in speed and ferocity.  There were a few surprises here and there but I think things turned out exactly how we thought they would, for the most part.  From my viewpoint, however, those matches weren't about winning and losing.  They were more about the experience, learning from the Japanese students, and forming a bond with them.  A bond that hopefully won't soon be forgotten.

I definitely learned a lot in our short time together.  I learned that I have a long ways to go to practice at their level comfortably.  At the same time I'm inspired to improve.  They all pushed me way past what I thought I was capable of before, and I was able to step everything up a few notches to try and keep up with them.  Instead of backing away from the challenge I was able to embrace it and come through somewhat successfully.  I plan to take this experience into my training from here on out and hopefully it will help evolve my kendo into something greater than it is now.  And I look forward to seeing the students and their sensei again in the future!

Popular posts from this blog

June 02, 2011
It's been a while since I last posted.  Partly because the site was doing some weird things to me, and partly because last week was a bad week for me as far as Kendo goes.  I was able to make practice on Monday and Tuesday night, and I felt like I was lacking.  I was kind of in a slump over my Kendo and I was really down and hard on myself.  But things picked up over the weekend because I found some inspiration and confidence and was able to bring it out this week, just in time for the Rose City Taikai this weekend!


Last night we trained in the dark.  Literally.  During our warmups a nasty storm blew in, with hail, thunder, and lightning.  While we were doing hayasuburi the lights actually ended up going out.  Did this stop us?  No, not entirely.  There were still a few people that finished out their sets in the (almost) pitch black.  Luckily it only lasted for a couple of minutes, but that's what I love about our dojo.  Even if the lights go out and all is dark we're stil…
Post a Comment
Read more

Kendo in the Lone Star State

December 10, 2019
A few weeks ago I had the opportunity to travel to Dallas, TX for a week for work.  Being me, I brought my bogu and shinai, of course, and planned on using my free evenings to check out the local kendo.  I was not disappointed.  I was able to get in four trainings total, amongst two different dojos.

My first night of training was with the fine folks at Dallas Fort Worth.  Ichimura Sensei and company were very friendly and accepted me in for training.  I made some fast friends and enjoyed keiko with many students and teachers.  Cooper Sensei struck me as very jovial, both inside and outside of practice, and I had a wonderful time exchanging attacks and conversation with him.  I put forth my best efforts, and appreciated getting to see and experience kendo way outside of my comfort zone in the PNKF region.  The two hour class went quick, but I had a couple more practices lined up there so I looked forward to visiting again.

My next training was at Plano Dojo, home of Chris Yang Sensei.…
1 comment
Read more

Another Year, Another Decade

December 31, 2019
What a whirlwind year 2019 was for me.  It seemed to come and go quicker than I've ever seen in prior years.  One minute I was ringing in the new year, and now I stand on the edge of this year, not to mention this decade.

2019 brought a lot of changes for me, both big and small.  I started a new job, which I'm thoroughly enjoying.  I was able to start traveling again, which I've always loved to do (even if it is for work).  We have not one but two new venues for training here in Spokane and were able to finish out the last few months strong, even though we had a bit of a lull in training due to no dojo.  Despite that, though, I was still able to clock 92 days of training this year.  Not bad for not having our own dojo for six months, I think.  I'll be shooting to break that number next year!

One of my biggest wins this year, personally, was the fact that I consistently did suburi every single day.  I'm part of a group on Facebook called the Hundred Suburi Club …
Post a Comment
Read more

Chris
My name is Chris and I practice kendo with the Spokane Kendo Club. I started my journey in 2009 at the spry young age of 27 and am currently ranked 4 Dan. Every class is a chance to improve my technique, myself, and those that I train with.