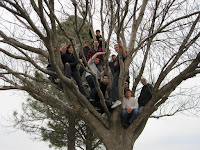 What an amazing, long, Kendo-filled weekend!  After a much-appreciated day of rest and relaxation yesterday I'm ready to get back to it and log my experience at the shinsa this weekend.  It will definitely be a weekend to remember.

We started out with our usual van ride across the state and over the pass on Friday and attended the training at the Bellevue dojo that night.  It was kind of a special night there.  Not only were we there visiting but the UW guys and girls were there, too.  They are getting ready for the Harvard collegiate tournament and wanted to set up some team matches to practice.  I was picked to be part of that experience and was grateful for the chance to help...and for the chance to change rooms because the main dojo felt like it was about two hundred degrees!

We were split into teams, five on five, with a mix of people from different dojos banding together to face various sets of UW kenshi.  Honestly they did well all throughout, only losing out on a few matches that I saw.  I was placed as taisho (fifth and final spot to fight) in both of the matches I participated in.  The first match I fought Stern, whom I faced over a year ago at PNKF.  He has definitely improved since then as I had a hard time landing anything on him, but was finally able to score a Men strike as he backed up to give me the only point of the match and the win.  My second match was against Kim, and this is the fourth time we've faced each other (the other three times in official taikai matches).  Again I could tell that he improved a lot since last time, and neither of us were able to score although there were a lot of close calls from both of us.  That match ended in a tie.  I was excused to join the rest of practice and enjoyed some great jigeiko matches with many of the yudansha from Bellevue, including Yotsuuye Sensei.  I think that was about my favorite match of the night.  He has a very smooth, sure style and he was able to pressure me without much effort.  At least from my point of view it felt like he was very comfortable pressuring in and hitting me.  I definitely want to develop this in my own Kendo.  Such effortless grace in my movements.  After closing out and thanking our hosts we headed back to the hotel for dinner and sleep.

The next morning we were all up bright and early.  I don't think any of us could sleep with the amount of excitement in the air.  After a lazy morning we headed out to the shinsa to get ready.  We went through the opening and warmups and then split into our various groups for testing.  Our group didn't have long to wait.  There were three courts set up for the juniors, mudansha, and yudansha tests, and our group was first up on the court.  The jigeiko matches came first and I focused on being smooth and confident and not trying to do anything that I was unsure about.  I wanted to show the essentials of my Kendo, not try to throw out a bunch of fancy techniques that might or might not work.  In doing so I ended up doing various forms of Men, Kote, and Kote-Men.  I threw in a few oji waza, as well, when I felt that I had the right opportunity.  My second match was actually with my buddy Matt, which was a lot more relaxing.  We train together all the time and we are always pushing each other to be better so when we went out for our round we threw everything into that two minutes.

After all of the groups had finished we prepared for the kata portion of the test.  I had to perform Nihon Kata one through five, and my partner was my friend Wes from Idaho.  During my Ikkyu test I had done kata with a kenshi from Idaho and she performed wonderfully so I was looking forward to performing with another person from Idaho.  We went out and started, and for the most part everything went well.  There was one slight hiccup that I had when I started to move a half-second before Wes moved, but we both remained calm and quickly got back on track so we were able to recover smoothly.  After finishing and bowing out we watched the rest of the groups and waited for the results.

Before the results were posted, our judges gathered us together and gave us some advice and thoughts.  Imanishi Sensei stressed the importance of ki-ken-tai-ichi and urged all of us to really focus on bringing each of those elements together as one explosive action.  Curtis Marsten Sensei had some advice that really stuck in my head.  To paraphrase, he told us that Kendo has four pieces that work together, like the legs on a chair.  They are kata, shinsa, shiai, and keiko.  He said that if we want to have complete Kendo we must have all four pieces and be able to understand how they work together and be able to apply the principles that they teach us to each other.

The results were finally posted afterward and everyone was excited to see their scores.  I checked mine and was delighted to see that I had received a five out of five on both my jigeiko and my kata portions, which means that I am now Shodan!  While this is a definite milestone for me, I also know that this is just the beginning.  In reality, what this means is that I now understand the basics to a point where I can start really learning Kendo.  It might sound odd to some, but to me it makes sense.  On the way home from the shinsa we stopped for ice cream and celebrated a long-held tradition at our dojo.  Sinclair Sensei brought out three paper crowns to crown all of us Shodan that passed that day.  He also gave us the "Shodan Talk," as I call it.  He explained that we now have the essentials and tools under our belt to really start growing in our Kendo.  He also said that we should remember to not get big heads or egos due to our new rank (something he calls Shodan-itis :-) ), and that we should help to keep each other accountable to continue training just as hard, or harder than ever, so that we can continue to improve our technique and understanding of Kendo and also so that we can set good examples to others at the dojo.

So I made it.  A milestone.  But this journey is far from over.  This isn't even the top of a mountain.  This is the very bottom and now I'm ready to begin the hike up the mountain (or mountains, as the case may be).  There is still so much more to learn, and so much more to improve and refine in my current technique.  Kendo is so simple to learn yet so impossibly difficult to master (I use the term "master" very loosely here), but therein lies the reward if we work hard enough. 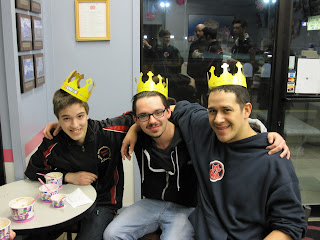 Popular posts from this blog

June 02, 2011
It's been a while since I last posted.  Partly because the site was doing some weird things to me, and partly because last week was a bad week for me as far as Kendo goes.  I was able to make practice on Monday and Tuesday night, and I felt like I was lacking.  I was kind of in a slump over my Kendo and I was really down and hard on myself.  But things picked up over the weekend because I found some inspiration and confidence and was able to bring it out this week, just in time for the Rose City Taikai this weekend!


Last night we trained in the dark.  Literally.  During our warmups a nasty storm blew in, with hail, thunder, and lightning.  While we were doing hayasuburi the lights actually ended up going out.  Did this stop us?  No, not entirely.  There were still a few people that finished out their sets in the (almost) pitch black.  Luckily it only lasted for a couple of minutes, but that's what I love about our dojo.  Even if the lights go out and all is dark we're stil…
Post a Comment
Read more

Kendo in the Lone Star State

December 10, 2019
A few weeks ago I had the opportunity to travel to Dallas, TX for a week for work.  Being me, I brought my bogu and shinai, of course, and planned on using my free evenings to check out the local kendo.  I was not disappointed.  I was able to get in four trainings total, amongst two different dojos.

My first night of training was with the fine folks at Dallas Fort Worth.  Ichimura Sensei and company were very friendly and accepted me in for training.  I made some fast friends and enjoyed keiko with many students and teachers.  Cooper Sensei struck me as very jovial, both inside and outside of practice, and I had a wonderful time exchanging attacks and conversation with him.  I put forth my best efforts, and appreciated getting to see and experience kendo way outside of my comfort zone in the PNKF region.  The two hour class went quick, but I had a couple more practices lined up there so I looked forward to visiting again.

My next training was at Plano Dojo, home of Chris Yang Sensei.…
1 comment
Read more

Another Year, Another Decade

December 31, 2019
What a whirlwind year 2019 was for me.  It seemed to come and go quicker than I've ever seen in prior years.  One minute I was ringing in the new year, and now I stand on the edge of this year, not to mention this decade.

2019 brought a lot of changes for me, both big and small.  I started a new job, which I'm thoroughly enjoying.  I was able to start traveling again, which I've always loved to do (even if it is for work).  We have not one but two new venues for training here in Spokane and were able to finish out the last few months strong, even though we had a bit of a lull in training due to no dojo.  Despite that, though, I was still able to clock 92 days of training this year.  Not bad for not having our own dojo for six months, I think.  I'll be shooting to break that number next year!

One of my biggest wins this year, personally, was the fact that I consistently did suburi every single day.  I'm part of a group on Facebook called the Hundred Suburi Club …
Post a Comment
Read more

Chris
My name is Chris and I practice kendo with the Spokane Kendo Club. I started my journey in 2009 at the spry young age of 27 and am currently ranked 4 Dan. Every class is a chance to improve my technique, myself, and those that I train with.